Trinidad & Tobago Computer Society (TTCS) Statement to the Telecommunications Authority of Trinidad and Tobago
on the proposed acquisition of Columbus International by
Cable and Wireless Communications.

This comment is submitted by the Trinidad and Tobago Computer Society (TTCS ; http://cs.tt ) in response to the request for comments on the proposed acquisition of Columbus International Inc.(CII) by Cable and Wireless Communications (CWC)  published by the Telecommunications Authority of Trinidad and Tobago (TATT) on January 5th, 2015. The TTCS has commented on various ICT issues over the past decade as it relates to the interests of end users.

The proposed acquisition can lead to high ownership concentrations in the provision of voice and broadband Internet services throughout the Caribbean as well as in subsea fiber connections. This acquisition may also reduce the probability of healthy competition in mobile telephony services in some jurisdictions. The concerns with the proposed merger between the parties (absent speculation on changes in corporate allegiance) revolves around five main pillars:

Ultimately, the TTCS sees the proposed merger as having the potential to reverse two decades of progress in liberalizing the local telecommunication sector and that residential, business and government consumers may lose many of the benefits of competition.

Furthermore, the TTCS notes with concern that TATT has only allowed for a one week comment period on this complex issue. We believe that extending this comment period as well as increased advertising would increase the participation of the general public in this critical decision. 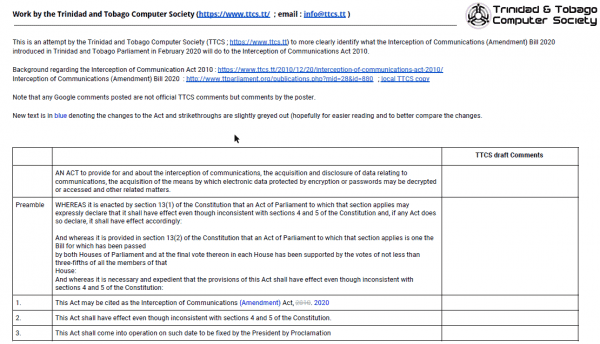 TTCS lime at Asian Buffet, Trincity Mall from 4pm to 6pm on December 14 2013 – discussion about Free and Open Source